The opening celebration for the Performing Arts Program took place at Kunstquartier Bethanien on May 23, 2013. The program was introduced and all attendees were warmly invited to inform themselves about the program, its initiators and staff as well as the content and goals while celebrating its launch.

The EFRE funding was approved at the end of 2012 and the ESF funding was approved in the summer of 2013. This allowed LAFT Berlin to transform from an advocacy group with a board of directors working on a voluntary basis into a project administrator. The time between November 2012 and May 2013 were dedicated to the detailed conception and planning of the programming, the staff planning as well as the establishment of the office and administrative infrastructure.

While searching for opportunities to better support Berlin‘s professional independent performing arts community, Berlin‘s Senate Chancellery for Cultural Affairs made LAFT Berlin aware in 2012, amongst other options, of the possibility of funding through the European funds EFRE (European Fund for Regional Development) and ESF (European Social Fund). LAFT Berlin recognized the opportunity of strengthening and comprehensively establishing its informational, advising, networking and further education work for Berlin‘s independent performing arts community with these funds.

For the field of the independent performing arts in Berlin, two operational programs came into question that are explicitly intended for Berlin‘s culture industry: “Promoting the Innovation Potential in Culture (INP)“ in EFRE and „Qualification in the Culture Industry (KuWiQ)“ in ESF. As both programs can only fund up to 50% of the project costs, Berlin‘s Senate Chancellery for Cultural Affair declared its readiness to co-finance LAFT‘s application using the city‘s own structural funds. This co-financing resulted for the first time in the opportunity to use funding from the EU fund as an association for the independent performing arts community; Janina Benduski and Stefan Sahlmann thus developed the first Berlin Performing Arts Program in 2012 whose content then became the goals of LAFT Berlin and which were in accordance with the guidelines of the respective operational programs.

In the first three years, 2013 – 2015, seven modules were created and realized under one organizational umbrella. An Information Center, an annual Industry Get-Together, an annual Marketing Competition, a Mentoring Program, a webbased Rehearsal Space Platform, Theater Scoutings Berlin and a Central
Marketing Office.
The program was operated with a decentralized structure, allowing the responsibility and coordination to be anchored within the individual areas. Half-time positions were intentionally created and freelance contracts were used. This corresponded to the working structures within the field of the independent performing arts and improved the program‘s integration within the community. 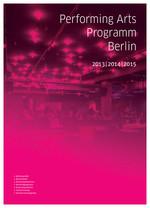